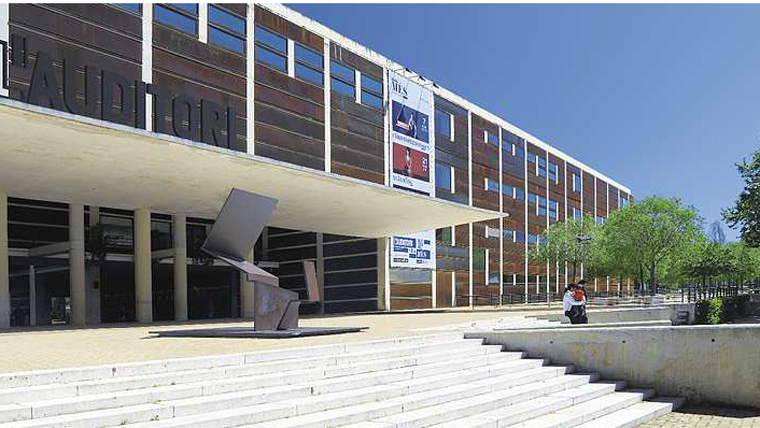 The Auditori is a modern building designed by the architect Rafael Moneo and boasting an area of 42,000 square metres. It officially opened on 22 March 1999.

The Auditori is a modern building designed by the architect Rafael Moneo and boasting an area of 42,000 square metres. It officially opened on 22 March 1999. It is located in the centre of the new urban development at Plaça de les Glòries, at the junction between the city’s three largest and longest avenues: Avda Diagonal, Avda Gran Via and Avda Meridiana. It is also nearby the city’s old quarter and the Eixample, next to the Teatre Nacional, by the Glòries road junction, where Diagonal opens up to the sea, the 22@ district and the Fòrum area.

The building combines a sober external modernity with the Sala 1 Pau Casals (with seating for 2,200 people), the Sala 2 Oriol Martorell (600 places), the Sala 3 Tete Montoliu (400 places) and the recently opened Sala 4 Alicia de Larrocha (152 places). The central access hall houses a monumental, cubic glass light, built in the shape of an impluvium and decorated with Pablo Palazuelo’s striped paintings. The halls’ acoustics were painstakingly studied in a project run by the specialist engineer, Higini Arau.

That same music complex also houses the headquarters of the Catalan Higher School of Music and the Music Museum, making the Auditori a focus of the city’s music life in the fields of dissemination, education and research.