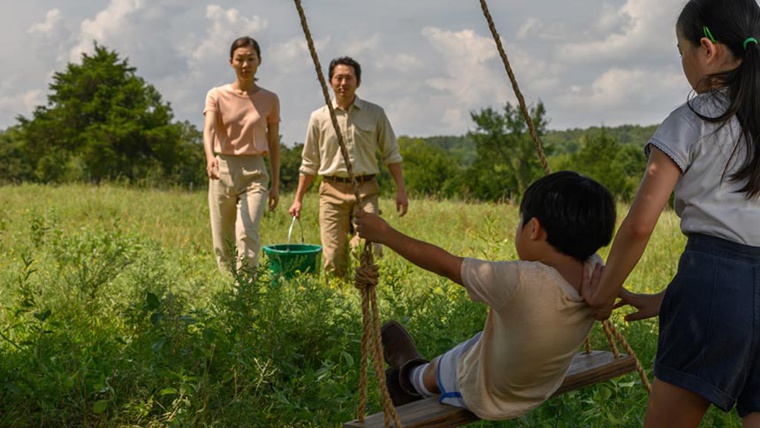 Films. Enjoy a new film at the CaixaForum every Monday and Thursday this summer.

This film cycle will offer a selection of feature films with impressive and exciting stories from several cultures.

A journey through the big screen, from South Korea and Japan to the UK, not to mention other countries as well.

A couple having suffered for some time because they are unable to conceive decide to adopt a child. Five years later the child's biological mother, now a young adult, turns up at the couple's home demanding her son’s return.

A humble family originally from Korea embark on a new life in rural Arkansas. They open a farm, in search of the American dream and a promising future for their children. The problem at the start involves the arrival of the maternal grandmother, who develops a special relationship with her grandson, David.

The film won an Oscar for best supporting actress, for Youn Yuh-jung, and a Golden Globe for best foreign-language film.

Four secondary school teachers decide to embark on an experiment with themselves: maintaining a constant level of alcohol in their system throughout their working day. Guided by the theories of a Norwegian psychiatrist, they believe this will open up their minds to the world around them, although the result turns out to be life-affirming.

After then end of the Second World War, a British woman writer receives a letter from an admirer from Guernsey, one of the Channel islands. When she reads the story of their book club during the German occupation, she travels there in search of inspiration for her next novel, but finds a story that exceeds her expectations.

Fern has reached an advanced stage in her life. Despite that, she finds herself without a regular job or roof over her head. A situation that prompts her to travel the land in search of seasonal work to make ends meet.

Poland’s Jews remain under siege by the Nazi army for over a year, but even life continues even in the Warsaw ghetto. A group of actors perform a musical at the Femina Theatre for the public, to distract them from their cruel reality for a few hours. But a plan to escape hatches behind the scenes.

The leader of a group of children petty thieves is recruited by a criminal mastermind to infiltrate a school. There he has to look for a way to find the access point to a nearby sewer for hiding valuable treasure.

A young criminal is incarcerated in "La Maca", a prison in the Ivory Coast whose convicts are the ones who control what goes on inside its walls. True to their tradition, the head of the prison chooses the young man who has just arrived to narrate a story for the other prisoners. His only opportunity is to keep the story going until dawn.