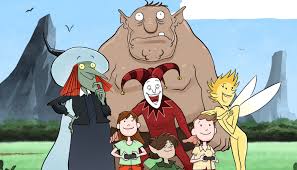 Young children. Sílvia and Jep enter the land of the ‘snergs’ while playing a video game.

The adventure is narrated by Sílvia and Jep, two children who are playing a video game called snergs one day when they suddenly get magically transported into the game.

Inside the game they embark on an odyssey to reach the land of the snergs, which is the goal of the video game. Characters such as Gorbo, a clumsy snerg on his way back to his country, their guide Bladry, a very talkative and mocking jester who’s lost his job, and Marse, a fairy godmother who helps them get there, basically helping them to end the video game they were playing.

In contrast, other characters such as Golithos, an ogre who is now vegetarian but who wouldn’t mind eating some tender flesh again, and Meldrum, an evil witch, will try to stop Gorbo, Baldry and the children reaching the land of the snergs.